In 1997 Harry purchased three females from John Doughty, Tugby Annie, Tugby Phantasy 2nd and Tugby Tess 7th. Later in the October of that year, we added to the herd with the purchase of Tofts Heather and Tofts Rose from Perth. These early lines have formed the mainstay of the herd with many of our success stories going back to these early purchases.

In 2002 the foundation females were added to with the purchase of cows from the Wenmar dispersal, the highlight of which was Wenmar Madeline N15, the mother of our most recent sale success Podehole Beefeater , a Trojan of Craigeassie son who sold in Perth February 2010 for 14,000gns (narrowly missing out on the breed record of 14,500gns which has stood since 1942) and our successful show cow Podehole Madeline Zeta who’s career pinnacle was taking the breed championship at the Royal highland Show in June 2010, as well as a whole host of other interbreed and breed championships. 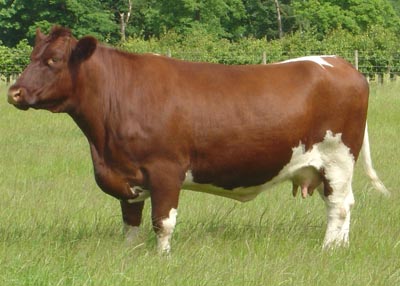 More recently we sold Podehole Drummer in Stirling February 2012 for 13,000gns. He is a Trojan of Craigeassie son out of Podehole Madeline Tiffany, a Wenmar Lucious daughter out of Wenmar Madeline N15.

This family continues to shine with Podehole Madeline Choice winning overall champion at the National Show held at East of England, Royal Highland Show and Great Yorkshire Show 2013. She is also by Trojan of Craigeassie and out of Wenmar Madeline N15 making her full sister to Beefeater. 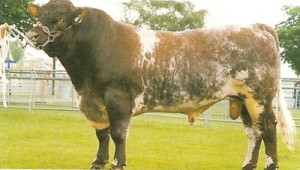 Our early male purchases included Lock Awe Lucky Jim, who was bought  in partnership with John Doughty in October 1998, and Balmyle Crackle who was also used.

In 1999 we bought Nathan of Quoiggs who was used across the herd and was shown in 1999 where he stood interbreed champion at Newark show. 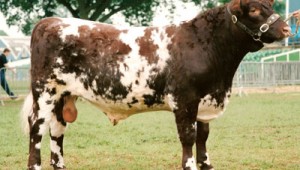 In 2000 we embarked on the next chapter of the Podehole history book when we took a liking to Chapelton Promoter at the Royal Show as a yearling bull.

The herd is now currently closed with the exception of bought in new stock sires. Cows number 53 with followers and calve mainly in the spring with heifers calving in the autumn.

Some of our show and sale highlights with the Beef shorthorns are as follows: